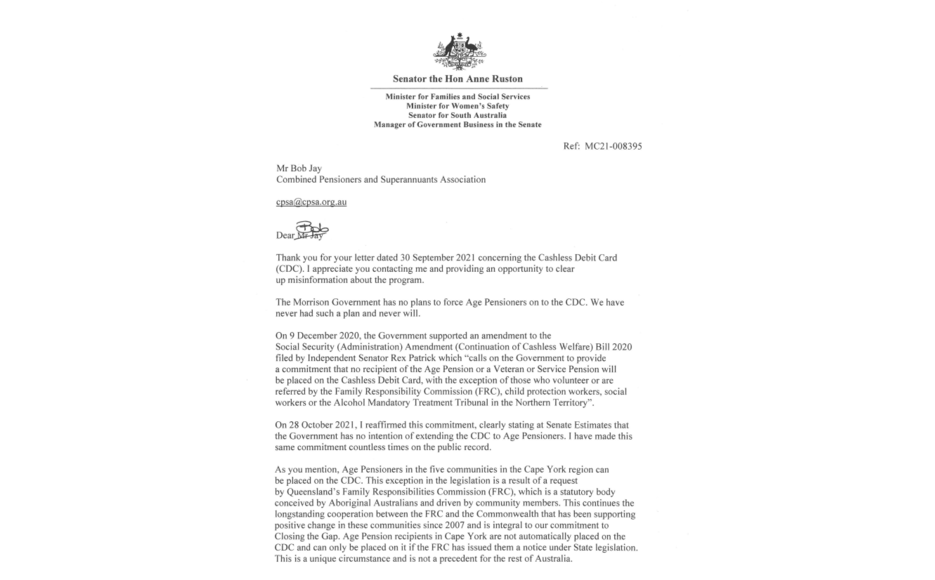 Below is the text of the Social Services Minister’s letter to CPSA. Note that:

The text of the Minister’s letter:

The Morrison Government has no plans to force Age Pensioners on to the CDC [Cashless Debit Card]. We have never had such a plan and never will.

On 9 December 2020, the Government supported an amendment to the Social Security (Administration) Amendment (Continuation of Cashless Welfare) Bill 2020 filed by Independent Senator Rex Patrick which “calls on the Government to provide a commitment that no recipient of the Age Pension or a Veteran or Service Pension will be placed on the Cashless Debit Card, with the exception of those who volunteer or are referred by the Family Responsibility Commission (FRC), child protection workers, social workers or the Alcohol Mandatory Treatment Tribunal in the Northern Territory”.

On 28 October 2021, I reaffirmed this commitment, clearly stating at Senate Estimates that the Government has no intention of extending the CDC to Age Pensioners. I have made this same commitment countless times on the public record.

As you mention, Age Pensioners in the five communities in the Cape York region can be placed on the CDC. This exception in the legislation is a result of a request by Queensland’s Family Responsibilities Commission (FRC), which is a statutory body conceived by Aboriginal Australians and driven by community members. This continues the longstanding cooperation between the FRC and the Commonwealth that has been supporting positive change in these communities since 2007 and is integral to our commitment to Closing the Gap. Age Pension recipients in Cape York are not automatically placed on the CDC and can only be placed on it if the FRC has issued them a notice under State legislation. This is a unique circumstance and is nota precedent for the rest of Australia.

Age Pension recipients in CDC regions can choose to volunteer to participate in the CDC program if they wish. These volunteers may choose to leave the CDC at any time. People volunteer for a range of reasons, including to help budget and save, to ensure they have money to pay for bills and other essentials and to protect themselves from being others to hand over cash.

In discussion with my office I understand the CPSA also flagged concerns with a statement I made to the media last year where I said “we are seeking to put all Income Management onto the universal platform”. To clarify, Income Management is the name of a specific program and longstanding program where participants typically use the BasicsCard. The term is not synonymous with social security payments in a general sense. Income Management was established in the Northern Territory in 2007 and expanded to 12 sites between 2008 and 2013. As I went on to explain in the press conference, there are multiple forms of Income Management in place across Australia and the Government is seeking [to] transfer people who are currently on Income Management to the CDC platform.