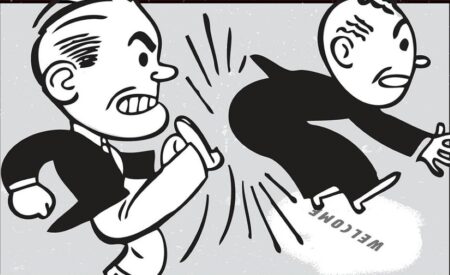 THIS question was asked by a caller to CPSA on behalf of her elderly father, who had been evicted from his nursing home while he was in hospital. The family was under pressure from the hospital to find a new nursing home for her father, whose hospital stay was no longer necessary.

In this particular case, the nursing home sent the family a specific termination-of-contract letter, citing the prolonged absence of her father and claimed he was violent and disruptive. Her father had dementia and had been in the locked section of the nursing home.

The nursing home’s action was a bluff, but a bluff that works more often than not, as it did in this case.

The federal Department of Health has the following policy on the eviction of residents, which covers seven scenarios.

First, a nursing home closing down is a logical reason for residents having to be assisted in finding an alternative. Closure can be because the provider has made a decision to close a home for any reason, but it can also be because the regulator closes the home after the home has been found to be unsafe.

Third, an Aged Care Assessment Team (ACAT) may decide a resident doesn’t need the care provided by a nursing home anymore. This could apply in the case of people recuperating from medical interventions and regaining their health and functioning.

A fourth scenario is where a resident is absent from the service for seven days or more for reasons not permitted. Going into hospital obviously is a permissible reason, but a four-week cruise might not be.

Fifth, a resident was receiving care under a specialist dementia care agreement, which a clinical advisory committee has determined they no longer need. For example, in the latter stages of dementia, someone who previously displayed violent behaviour may enter a catatonic stage. A nursing home specialising in care for dementia sufferers with violent or severe roaming behaviours would obviously want to free up that person’s place.

Sixth, if a nursing home cannot, or can no longer meet a resident’s assessed long-term needs, this resident may need to be accommodated elsewhere. For example, advancing dementia can cause sufferers to become violent. Obviously, a nursing home without a locked section would not be able to manage such behaviour.

Lastly, a resident who intentionally causes serious damage or injury to staff or another resident may be evicted.

The Department of Health makes it very clear that eviction doesn’t mean making residents homeless. Alternative accommodation must be found before a resident is made to leave.

This brings us back to the caller to CPSA whose father was evicted while in hospital. Clearly, his nursing home simply turfed him out, relying on the hospital not to do the same.

Eventually, the caller and the hospital found a new nursing home for the caller’s father. This is the text of an email the caller sent to CPSA:

“I found somewhere for my 37kg dad to go on Friday. He was on his way to the new facility, where I was waiting for him to arrive. (..) I was informed by the facility that they had been told dad was COVID-positive and he would not be allowed to enter. He was in transit only five minutes away. Dad was then sent back to [the hospital] and is currently on [a ward] which is not a COVID-ward and they are treating him as palliative although he is breathing easily but they have started the morphine and he is no longer responsive. No happy ending.”

Clearly, the original nursing home’s bluff worked, but shame on them!